It is with sadness that we bid farewell to our patron Jean McLaren, who passed away peacefully on 22 September 2021, aged 91 years.

Jean’s husband Verne McLaren AM had been our patron since the Group’s inception. He passed away in September 2010. Jean accepted an invitation from us to take up the role.

As newsletter editor at the time, I asked Jean if she could write a short piece for the newsletter introducing herself to the group. She sent me two handwritten pages detailing her early years, how she met Verne and their eventful and adventurous life together. It made fascinating reading at the time, and is well worth reprinting as a summary of Jean’s life.

Jean McLaren writes about herself…

I was born in Robe in June 1930 and attended Robe Primary School and Mt Gambier High School. In order to attend High School, I had to board in a private home.

After leaving High School, I worked in the Superintendent’s office of the South Australian Railways in Mt Gambier. During this time I met Verne at a ball in Kingston. We had both been to Sydney for a holiday a few weeks before this meeting and we had something in common.

In 1952, Verne spent six months in the Royal Adelaide Hospital and I came to Adelaide and worked in the office of Lloyd’s Timber Mill at Kent Town. This was at the time when my mode of transport in the City was a tram.

We were married in November 1952 and country life was a far cry from an office. I had no modern conveniences. A chip bath heater, kerosene refrigerator, 32 volt power, a party telephone line etc. made life comfortable.

We grew our own vegetables, fruit trees, nuts, killed our meat, milked a cow. These were happy and memorable times. My grandmother had a small property and my father was a butcher, so I had some experience with animals.

As you know, Verne was developing our country and became interested in conservation. Naturally I followed the interest. We did everything together. I had been brought up with a father who was keen on bird watching up until he died at 91, and both my parents loved history and built heritage.

Verne and I became involved with the local school committees. When the girls started school and as they grew up, we were able to become more involved with community activities, such as the National Trust and Friends of Parks etc. I was a District Commissioner of the Girl Guides in the South East, and Secretary of the Upper S.E. Red Cross Region, and President of the Lower South East Region when we moved to Robe. I also held positions in the local branches. I worked in Millicent for three days registering people who had lost their homes etc. in the fires of 1983.

Verne and I had wonderful trips overseas, visiting National Parks and observing the flora and fauna. Each country was so different. Landing at the geographic North Pole and touching Mawson’s Hut in Antarctica were wonderful experiences. The beauty has to be seen to be believed. I have ridden elephants to see tigers and walked into the bush to see Asiatic lions. Quite an experience.

One of my most treasured memories was when Verne received his AM from Her Majesty the Queen on board the Britannica in 1986, for his conservation work. I enjoyed assisting Verne whenever and wherever in his conservation interests. I always joked I was the unpaid secretary.

Verne and I have had a great influence on our grandchildren. They love nothing better than going down to our bush in the South East.

Verne and Jean were an integral part of our group from the beginning. The following is an extract from our first newsletter, Vol. 1 no. 1 Feb-Mar 1994… 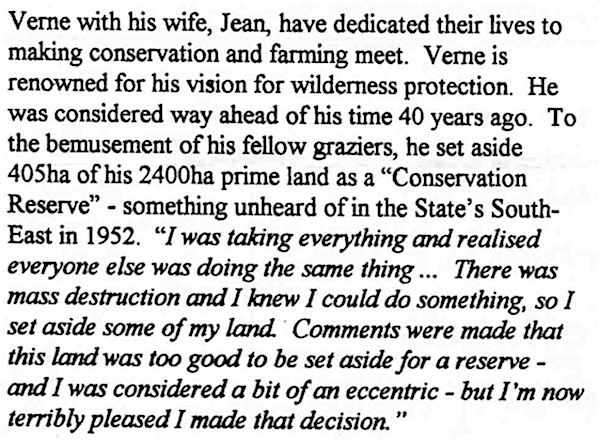 Visits to the McLaren property

Our group visited the McLaren property ‘Bernarra’ at Kingston in the south-east twice. The first was on 14 Nov 1993, in the very earliest days of our group. The following report is from Vol. 2 no. 1…

Our second visit was in March 2011. Vern led us on a long and fascinating walk around his bushland, 1070 acres of scrub that he left uncleared when he first established his property for farming. Common Wombats live in the area, and numerous droppings were evident along the trail, and to those of us used to the Hairy-nosed Wombats of the Mallee, they were whoppers. Mallee Fowl are also resident and Vern knows of 19 nests, several of which were seen, including one currently being worked.

Vern also showed us a “wedge waterhole” he had discovered on the property and cleaned out so that the birds and animals could drink from it. He had also built a hide alongside to enable him to observe and photograph them. He does not know who built the waterhole, but assumes it was done in the early days of white settlement to provide water for stock. Another less welcome relic of the past is feral red deer which remain on the property.

The vegetation again showed infestation from bridal creeper, although this was more evident around the edges, less so in the centre of the scrub. The eucalypts showed significant lerp infestation and Vern speculated this may be due to the loss of one or more bird species who feed on these leaf eaters.

In the centre of the scrub, the coastal wattle was dying off and there was little regeneration, while there was significant regeneration along the edges and roadsides in the area, where it was considered by some to be a weed and spreading well beyond its original range. The dynamics of this species are not fully understood, and it remains something of a controversial plant in the South East. Other plants seen in the lower strata included Grasstree (Xanthorrhoea semiplana), bracken, Milkmaids (Burchardia), Hibbertiasp., Sundew (Droserasp.), and various sun orchids and lilies. Over 30 species of birds were seen, including the infrequently seen cockatiel and budgerigar.

Helen Smith visited Jean often to drop off the group’s newsletter, and to have a chat, always lively. Jean spent her recent years at the Clayton Church Home in Magill.

Pete and I deputised for Helen on one occasion and had a long and lively chat with Jean, who seemed surrounded by a group of residents that she kept involved and entertained. My memory will always be of her with a twinkle in her eye and a keen interest in what went on in the world.

Our condolences go to Jean’s two daughters, Anne and Heather, and sons-in-law Gil and Gordon, as well as to her grandchildren and great grand-daughter.